It seems that Barratt’s contractor is not responding to emails, phone calls and refusing to sign for recorded delivery letters from residents.   We’re following this up and will post further updates here as we get them.  In the meantime, by all means email or write to the contractors but hang onto any cheques until we have clarification on what they’re up to.

For advice on your rights and how to find out if you’ve been filmed check out the comments section at the bottom of this post!  You have a right to a copy of any images they have captured of you!

And…. let us know if you contact the contractors, and keep us up to date with your progress by emailing us at info@keepourmeadowgreen.org…..  we’re here to help!

Do you remember what you were doing on Longton Road on Thursday March 5th?  If you don’t,  I’d wager that Barratt Homes and their associates do.   How is that possible I hear readers ask?  No respectable company would knowingly associate with illegitimate, unnoticed and unsigned surveillance of a local community in breach of the ICO CCTV code of practice and Data Protection Act would they?

Once more I have to disappoint readers and advise that, yes, on behalf of Barratt Homes, contractors carried out what can only be described as covert surveillance without following the required rules and regulations.  So……  on March 5th, without your knowledge or consent, you were being filmed !

To make matters worse, when a resident confronted the contractor with legitimate concerns about non-compliance with regulations set out by the Information Commissioners Office, the contractor became aggressive, insisting he would carry on, even thought he knew he was clearly breaching the regulations.

Ironically, although this contractor was illegitimately recording us for Barratt Homes planning application, when he thought  his conversation about his non-compliance with regulations might also be recorded, he swiped the iPhone from the residents hand, knocking it to the ground.  Luckily the iPhone was only slightly damaged, but this didn’t stop the contractor swearing at the resident.  Fortunately other residents were on hand, and the incident wasn’t allowed to escalate.

As readers of the earlier  blog entires in this site will be aware, Barratt Homes have been caught out presenting traffic data to the Councils Planning Department that completely misrepresents the facts.  So, it appears that Barratt Homes have now commissioned another traffic survey, and this time lets hope they construct a fair and reasonable representation of the traffic flow through the area ( as they should have the first time).

However, the contractors “Traffic Sense Ltd” are of the opinion that it’s ok to conduct such a survey by attaching cameras high up on lampposts and not to inform anyone of their activity.  This is not only contrary to the ICO’s code of practice and Data Protection Act to which they must adhere, but it seems they may not have had the necessary permission from the Council to use the lampposts for such surveillance either.

One camera in particular was causing residents and staff concern as it was at the height of the adjacent house’s bedroom window.  Petrol station staff voiced concern that the camera may have been placed there by criminals recording events at the petrol station and ATM.

What Mr Roberts ( the contractor ) should have adhered to, is the cctv code of practice where in section 9 at page 36/37 it clearly states:

You must let people know when they are in an area where a surveillance system is in operation.

The most effective way of doing this is by using prominently placed signs at the entrance to the surveillance system’s zone and reinforcing this with further signs inside the area.

Clear and prominent signs are particularly important where the surveillance systems are very discreet, or in locations where people might not expect to be under surveillance. As a general rule, signs should be more prominent and frequent in areas where people are less likely to expect that they will be monitored by a surveillance system. This is particularly important when an ANPR system is being used that covers a large area.” 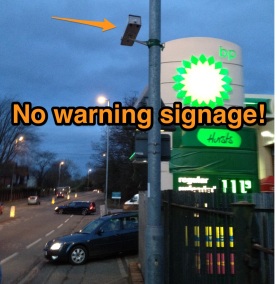 The Keep Our Meadow Green residents committee have consulted the Information Commissioners Office and are taking the necessary action to bring this rogue surveillance company to account.

I’m afraid the arrogant, aggressive  and probably illegal behaviour of this contractor is consistent with the approach we have seen from Barratt Homes throughout the planning application process.  If this is the standard of contractor we can expect in the area in the event that planning permission is granted, its worrying.

Please do get behind the cause and encourage everyone affected to lodge their objection on the Council planning site.  Even if you have already objected, please feel free to post another objection.

Finally, if you believe you or your vehicle may have been recorded on Longton Road on Thursday March 5th and you did not see the cameras or highly visible warning signs ( because there weren’t any ), then get in touch with us at info@keepourmeadowgreen.org.

5 thoughts on “You’ve been framed!”

Like a ‘Fleecehold’ lease property in a flood zone? Buy from Barratt!